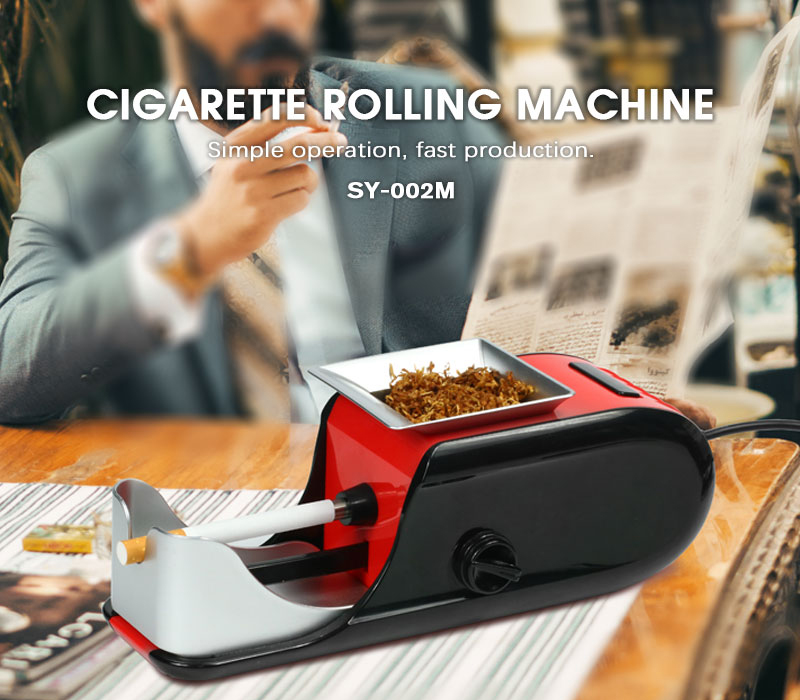 forming
It is composed of two parts, a suction ribbon and a smoking gun. The suction ribbon is a porous conveyor mesh belt, the back of which communicates with the suction chamber. Because the suction chamber is under negative pressure, the tobacco is sucked tightly on the surface of the mesh belt from the air duct and sent to the smoking gun. Before leaving the mesh belt, the tobacco shreds are trimmed by a leveler for precise quantification. At the entrance of the smoking gun, the shredded tobacco falls on the cigarette paper, is wrapped by a cloth tape, and is rolled into the smoking gun, and gradually rolled into a continuous cigarette stick.

Cut
The cutter head adopts a rotating structure. The blade rotation axis is inclined to the tobacco rod axis. When the knife shaft rotates, the blade produces relative movement along the tobacco rod axis. The relative speed at the cutting point is equal to the tobacco rod speed to ensure that the cigarette has a flat cut. . The structure similar to the universal joint is more used. The cutter head is mounted on the inclined shaft and is driven from the horizontal shaft through the universal joint mechanism. When the length of the cigarette needs to be changed, the cutter head can be easily adjusted. Tilt angle.

Weight control
There are two systems, namely the pneumatic control system and the ray detection control system. The pressure sensor of the former is located before the tobacco rod is formed. According to the resistance of the air passing through the tobacco layer, the leveling device is manipulated to control the instantaneous flow of tobacco. The latter mostly use strontium 90 (Sr 90) as the radiation source, and the detection point is located after the tobacco rod is formed. The β-ray is attenuated when passing through the tobacco rod, and its attenuation is related to the density of the tobacco rod. The attenuated beta rays are received by the ionization chamber and converted into electrical pulses, and the signals are amplified to control the height of the leveler. The radiation detection control device is used to control the average weight of cigarettes.